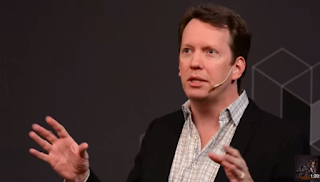 I’m quite excited for physicist Sean Carroll’s new book The Big Picture. It seems like a serious and erudite case for a comprehensive naturalistic worldview. In fact, I’m quite fond of Carroll, I find him to be one of the most articulate, intriguing, and respectable popular naturalists today. If more dialogue between theism and atheism took place with the demeanor that Carroll carries himself with, I truly believe that some progress would be made in these discussions. Carroll is one whom all theists should listen to, even if they disagree with him.


In any event, I was perusing his blog Preposterous Universe the other day and came across his post on “dysteleological physicalism.” Carroll’s defense of this ontology is, first, predicated on the idea that it is the job of physics to tell us what exists—you’ll remember Carroll echoing this sentiment in his debate with Craig wherein he claimed that our metaphysics must follow our physics—and thus everything that exists is physical; second, Carroll’s position rests on the notion that things that exist have no objective purpose or goal, and therefore have no teleology.


It’s no secret, among the common readers of this blog, that I disagree with both of these sub-ontologies that make up Carroll’s brand of physicalism. I think that the ontology of the universe is obviously not all that physics tells us, and I believe that teleology is intrinsic to the universe in the form of final causality. It is the latter belief that I plan to survey presently.


Carroll begins commenting on teleology with a very pertinent question, and continues from there:

If the world is made of things, why do they act the way they do? A plausible answer to this question, elaborated by Aristotle and part of many people’s intuitive picture of how things work, is that these things want to be a certain way. they [sic] have a goal, or at least a natural state of being. Water wants to run downhill; fire wants to rise to the sky. Humans exist to be rational, or caring, or to glorify God; marriages are meant to be between a man and a woman.

This teleological, goal-driven, view of the world is reasonable on its face, but unsupported by science.


The question of why things act the way they do should be near the forefront of one’s ontology. While physics can say that X behaves in such a way, it doesn’t (and cannot) answer the question of why it behaves that way in the first place. And so, to Aristotle, the notion of final causality was one concept that aided in answering this question. He claimed that we see certain effects uniformly follow from certain causes, under certain conditions, because the cause was aimed at producing said effect. (Note that while some of Aristotle’s examples that he utilized were physically wrong, this doesn’t negate the ontology of the concepts.)


However, Carroll remarks that this teleology is not supported by science, not just in the sense that science makes no use of teleology, but in the sense that science has actually “undermined” it. He goes on to say the following: At a basic level, all any object ever does is obey rules — the laws of physics. Thus, for Carroll, the “reason” that an object is in state Y can be fully explained by the fact that the object was previously in state X, and, by the laws of physics, state Y is a succession of state X. No purpose, no goal, just physics.


I maintain that this is false, and that Carroll has only side-stepped the issue by committing a category mistake. Nobody questions that because of the laws of physics we can explain how state Y was obtained from state X. That’s all well and good. The question is why state Y always succeeds state X. Why are certain effects generated from certain causes? Why is there causal regularity at all? Carroll’s attempt to run to the laws of physics for help doesn’t work here, for the laws of physics only redescribe the behavior of matter, and the behavior of matter is what we’re looking for explanation for in the first place!


(As a side note, this is a problem I see committed in education all the time, especially in math and science. A student asks why a certain property or rule holds—like, for instance, why acceleration is the derivative of velocity—and instead of answering the question the teacher just says, “because when we take the derivative of velocity, we arrive at acceleration.” But this obviously is not an answer to the “why” question. The teacher who does this is merely redescribing the property, instead of illuminating why the property is even efficacious in the first place. )


So Carroll’s trust in the laws of physics to relinquish teleology is misplaced. But it’s even worse than this: it’s false. For as I’ve argued before, the laws of physics supervene on causally regulated matter. That is to say, the laws of physics are contingent on uniformly behaving matter, and thus cannot possibly be that which explains why it behaves that way. So, what can explain this behavior? Well, if causal regularity exists in nature—if A’s regularly produce B’s, under certain conditions—then this can only be because A has an inherent dispositional tendency to bring about B. For instance, an acorn yields an oak tree, not because the laws of physics say it will, but because the acorn has an intrinsic disposition in it as a substance that is directed towards the generation of an oak tree. Recall that if this were not the case—that is, if substances did not have these dispositions—then one effect would not follow more frequently from any substance.


This concept of a substance harboring a tendency (sometimes called a “power”) to generate a specific effect is what is known among Aristotelians as final causality. And yet many philosophers, with no Aristotelian axe to grind, have returned to this ontology under the name of Dispositionalism. Again, this ontology is seen as a necessary condition for causal regularity, and is not at all ad hoc. (Notice as well that final causality is not an attempt to replace the laws of physics, rather it is only an explanation given at a deeper metaphysical level that explains why matter can even behave regularly so as to even be describable by physical laws.)

Email ThisBlogThis!Share to TwitterShare to FacebookShare to Pinterest
Labels: final cause, laws of nature, Sean Carroll