Richard Carrier on the God hypothesis 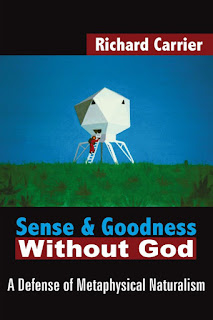 Richard Carrier’s book Sense and Goodness without God is one of the best defenses of metaphysical naturalism that I have read. He is very well-read, especially when it comes to philosophy and science, and even though I don’t agree with many of his conclusions, one can infer that his position, as he presents it, is warranted.

That being said, there are a few places in Carrier’s book where he surveys the justification for belief in God, and (shockingly!) finds said justification wanting. Obviously since I’m a theist I vehemently disagree with Carrier, and (also shockingly) I found his reasoning to be a bit sloppy and confused. As such, this post is my attempt to demonstrate where exactly Carrier goes wrong, and why what he says actually points towards God, instead of away from him.

First, Carrier considers the idea that God could be an explanation for the universe. He claims that this explanation isn’t a “good one,” and articulates a few points attempting to demonstrate such:

A few problems here. First, remember that God is claimed to be provable via logical deduction, and thus if this is indeed true (see e.g. the argument from contingency) then the existence of God is logically necessary., and therefore quibbling about how hard it is to fathom such an existence would be irrelevant. Let me demonstrate this with an example—from math! A math professor once showed me a proof that attempted to demonstrate that the sum of all positive integers equaled one-half. Hopefully it’s obvious that this conclusion seems absolutely absurd, since common sense clearly dictates that the sum of positive integers would converge to infinity.  Yet the fact that this proof infers something that is hard to fathom does not itself refute the proof. The proof still stands, and the only way I can refute such an inference is to find a mistake in the proof itself. Similarly, even if we couldn’t explain logically how God exists outside of space, time, and physical existence, this wouldn’t call the conclusion of such proofs into question, and thus it wouldn’t call God’s existence into question. Of course, remember that God’s existence would first need to be demonstrated in order for my answer here to be valid.

Moreover, classical theists have always posited what is known as the Doctrine of Analogy, which states that attributes predicated of God can only be attributed analogously, instead of literally. So when we say that God acts or thinks, for example, we don’t mean these words in the same way—nor in a completely different way—that we predicate them of ourselves or of natural things. Thus, Carrier’s claim that predications of God make no sense is only a problem if we are thinking strictly univocally. Now, this isn’t an ad hoc attempt to avoid the implications that Carrier has postulated. That is, the Doctrine of Analogy wasn’t formulated specifically to answer objections like those of Carrier. Rather, this doctrine is seen as a direct entailment of the doctrine of divine simplicity. Because if God cannot be composed of parts—as the doctrine of divine simplicity states--then there can be no parts in God that are distinguishable from each other. Thus since our predications of God are in fact distinguishable, then this must only be because our predications are analogous and not literal. So, when seen in light of these two points, Carrier’s problem here loses efficacy.

Carrier continues his explanation for why the “God hypothesis” does not constitute a good explanation:


And even if we can come up with an intelligible theory of creation, it still isn’t the best logical inference to make. Can we infer from what we see as a completely natural universe that a sentient Creator is behind it? Not really. Given the lack of any clear evidence for a god, and the fact that everything we have seen happen, which was not caused by humans, has been caused by immutable natural elements and forces, we should sooner infer the opposite: that immutable natural elements and forces are behind it all[…]Since we can explain everything by appealing to only those things and their properties, then (all else being equal) such an explanation is the most plausible one around—leaving no need and no sound reason to go beyond them and invent all manner of unproven entities, like gods and spirits and miraculous powers. Hence, even if the ‘god hypothesis’ were plausible, it would not by any means be the most plausible. (p. 72)


Again, we run into some complications. Carrier is viewing the “God hypothesis” through the lens of abductive reasoning here. That is, he’s comparing theism with other explanations (e.g., naturalism) and attempting to determine which provides the best explanation for the evidence we observe. “So what’s the problem?” you might ask. For isn’t reasoning to the best explanation a good thing? Indeed it is, depending on what’s attempting to be inferred. If you’re attempting to determine what a fossil is doing in the Cretaceous period, then abduction is perfect. But if you attempting to infer that the square root of negative two is an irrational number, then deduction, and not abduction, is your best tool. You see, if theists used abduction to try to reason to God—think of William Paley—then I would agree with Carrier’s claims. For Occam’s razor would entail that the God hypothesis multiplies entities extraneously and makes too many unnecessary assumptions. However, classical theism makes no use of abductive reasoning—and shouldn’t--but rather makes use of deductive reasoning. Deductive reasoning doesn’t use inference to the best explanation. Rather, deduction attempts to prove that something is necessarily the case. You see, classical theists didn’t argue that God is the most plausible explanation for the universe, rather they argued that God is a necessary condition for the existence of anything at all. And abductive reasoning cannot ground such a claim, but only deductive reasoning.

So Carrier’s claim that God would not be a good hypothesis is only efficacious if we follow him in using abductive reasoning to determine the ontological foundation of reality. But this is neither necessary nor logical. For if we can utilize logical deduction to infer what the ontological foundation of reality must be, then punting to abduction is superfluous here. The conclusions of deduction, if true, are necessarily true, and thus Carrier’s talk of best explanations is simply a category mistake regarding how the existence of God is usually arrived at. All this is to say that theists are playing chess while Carrier is playing checkers. If he wants to attack theism, then he needs to attack theists on the actual grounds that they utilize to make their arguments, otherwise he’s attacking a strawman.

Carrier then moves from talk of God as an explanation, to explaining God himself:


If everything must have an explanation, then you do not really get anywhere by explaining the universe by proposing a god. For then that god needs an explanation. Why does a god exist at all? Why that particular god and not some other? And where did this god come from? […] So either there is an eternal string of endless explanations, in which case there is no “ultimate” explanation because the explanations never end (and so the universe remains ultimately unexplained), or else there is something that has no explanation, something that just “is,” what we would call a “brute fact.” There are no other possibilities. (p. 73)


On the contrary, there is another possibility--something can be self-explanatory. Remember that classical theists believe, deductively, that God is a necessary being. The very nature of a necessary being is that its essence just is existence. That is to say, a necessary existent cannot possibly fail to exist. Therefore, when we ask “Why does the necessary being exist?” we’re really asking “Why does that which must exist, exist?” And such a question is self-evident and therefore self-explanatory—it answers itself. So, there is a false dichotomy here that Carrier is presenting between infinite explanatory regress and brute facts—which are impossible. An explanatory chain can end in something which is self-evident and explains itself—in fact this is done in mathematics! Now, Carrier (sort of) anticipates this answer:


Thus, the question for us really is: Where do we stop [the explanatory chain]? What is the one, ultimate “brute fact” that needs no explanation? Certainly, most people say this is God, that God is self-explanatory, having no origin, that God exists necessarily as the one brute fact. But that requires resting on a huge number of assumptions. Why not just stop with what we actually know—the natural world? Certainly this is just as viable. After all, if god needs no explanation, then why does nature need one? (p. 73)

So, Carrier is confused by claiming that extending our existential understanding to include God violates Occam’s razor due to the fact that we could just as easily stop at another brute fact that requires less assumptions, namely the universe. Since God would not be a brute fact, then Carrier’s appeal to parsimony here is misplaced.

Carrier still tries to avoid this conclusion and claims that “The multiverse explains everything that exists,” but we’ve seen that this is false. For the multiverse does not explain itself, nor does it explain why anything at all exists in the first place. For this we need a necessary existent, and the universe is not it, since it satisfies the definition of contingency. Carrier again anticipates this objection:


Of course one could ask why the multiverse exists at all, and why it has the exact properties it does. But as we’ve already shown something must exist without any explanation at all, so it may as well be the multiverse. (p. 82)


On the contrary, we’ve seen that an explanatory chain need not—and cannot possibly—end in an unexplained brute fact. It can, and must, end in that which explains itself and which exists necessarily. And unfortunately for Carrier this cannot be the multiverse, for it is contingent and therefore necessarily entails an explanation outside of itself.

So Carrier did not accomplish his goal in this part of his book. He did not show how God is an unnecessary and extraneous hypothesis. His thesis rested on surveying the wrong type of reasoning method when put forward by those attempting to prove God’s existence. Then his thesis rested on conflations regarding the nature of explanatory chains and how these relate to the ontological foundation of reality. So while I admire Carrier’s attempt to vindicate naturalism in a systematic nature, I believe he ultimately fails.
Posted by Steven Jake at 8:55 AM