A treatise on brute facts

Two years ago I wrote a post geared towards a refutation of the existence of brute facts and what this entailed for naturalism. Since this time I have engaged in many discussions with naturalists regarding this very topic, and as a result of those discussions I have (slightly) altered and polished my argument. And because of this I have, for a while now, wanted to write up another, more systematic, post which attempted to demonstrate the impossibility of brute facts. So, here goes.

Now, nobody disputes the existence of extrinsic brute facts; we all agree that there are things we don't know. The point of contention, and our domain of focus in our discussion of brute facts, is whether or not intrinsic brute facts actually exist or whether they are even possible. This is what is to be considered presently.

What should be noteworthy at this point is the notion of a brute fact is defined in terms of explanation. And, as we'll see below, the concept of explanation, and what it entails, is crucial in determining whether or not brute facts are possible. So, what constitutes an explanation? Well, the problem with defining this term is that an explanation can be given in many different domains and contexts. Take these different cases of explanations: the teacher explains the lesson; Susan explains what she meant; the nail explains why the tire is flat; the nonzero net force explains the change in velocity; the premises explain the conclusion etc. Notice that in each of these cases the presence of something--e.g. someone doing the explaining, an object, a force, an abstract concept or proposition--is the reason for, and clarifies, that which, in the absence of that something, would be unclear--the lesson, the meaning, the flat tire, the change in velocity, the conclusion.

The important concepts just utilized are reasons and intelligibility. When some fact is explained, there is a reason, account, or justification--which can be grounded in many things, from an object to an abstract proposition, as we saw above--which imparts some form of clarity and intelligibility to the thing that was heretofore unclear. Therefore, I maintain that the proper definition of "explanation" that should be utilized is "a reason whereby something is rendered intelligible." [2]

This entails something very important: acceleration is ultimately explained by position. In the specific explanatory chain that we are considering, all the concepts that lead up to position are only ultimately imparted their intelligibility by position itself. If position is dropped, then so are all the subsequent concepts--if position is rendered unintelligible, then so is acceleration. 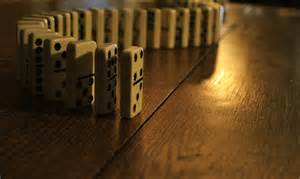 All of this entails something else that's even more important: explanatory chains are essentially ordered series. An essentially ordered series is a series wherein each member derives whatever efficacy it has from higher members--unless it is the highest member--such that if a member is lost, all the lower members will also be lost. This obviously fits like a glove with the example of position and acceleration above.

To illustrate this, consider a case of combustion, perhaps a candle that is lit. What is the explanation for this lit candle? Well, we can think of a couple. One explanation is the fact that somebody actually lit the candle, from. Another explanation is an oxidizing agent and a chemical reaction. These are both genuine explanations since they are both reasons wherein the lit candle is rendered intelligible. And here we also have two explanatory chains that converge on a single state of affairs. So, we have a situation where one explanatory chain (...A, B, C) converges with another chain (...X, Y, C) at the fact of C--the lit candle.

To substantiate this even further, consider the question at the forefront of this post: can a brute fact be part of a convergence of multiple explanatory chains? This doesn't seem possible since, again, a brute fact cannot have an explanation, by definition, and therefore it cannot have antecedent explanatory members. That is to say, a brute fact cannot be reliant upon another fact for its intelligibility, much less multiple facts. Furthermore, based on our intelligibility argument above, what we can also say is that if C is intelligible, then, even if it is part of multiple interwoven explanatory chains, we can safely say that none of the antecedent members in these chains contains a brute fact.