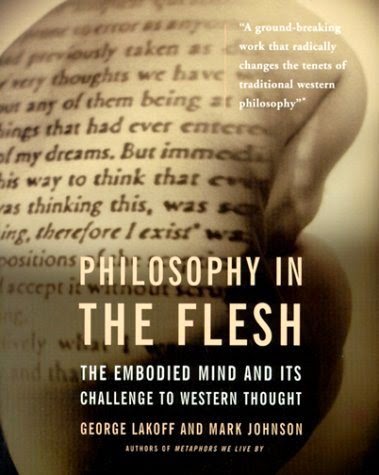 After much prodding from Mike D over at The A-unicornist—which he has now stopped writing for, unfortunately—to read his Holy Bible on embodied cognition, namely Philosophy in the Flesh, I have begun to do just that. And rarely does a page goes by where I don’t find myself scribbling in the margins regarding the things I find fallacious. With that in mind I felt the need to write up a series of posts regarding the parts I vehemently disagree with as I read along. So stay tuned for many posts to come regarding Embodied Realism.
___________________________________________
Embodied Realism (or Embodied Cognition), as articulated by Lakoff and Johnson, is predicated on a few themes: 1) The mind is embodied, 2) reason is mostly unconscious and 3) is structured by neural connections that conflate conceptual domains which lead to metaphor—which means that most of our concepts and cognition are metaphorical. Embodied Realism does not simply say that we need a body to reason, but, rather, that our reason itself is shaped and structured in unconscious ways by our embodiment.

My first bone to pick with Embodied Realism is its jettison of the correspondence theory of truth. The correspondence theory of truth basically says that a statement—what is called a truth-bearer—is true if it corresponds to an actual state of affairs—what is called a truth-maker--or obtains, in reality. As an example, the statement “There is a computer in front of me” is true if, in reality, there is actually a computer in front of me, and false if there is not.

It is this very theory that is called into question because of the supposed embodiment of cognition promulgated by embodied realism. To argue against the correspondence theory the authors attempt to demonstrate that concepts are embodied at the neural level, the phenomenological level, and the cognitive unconscious level. Let me illuminate these as best as I can, so we can articulate where the asserted difficulty arises.

The neural level basically regards the physical circuitry that characterizes, grounds, and structures all cognition and conception. The phenomenological level is the level that we are consciously aware of, and the level where we experience all of our qualia. And the cognitive unconscious level is the level of cognitive operation that evades our conscious subjective experience; that is, it is what structures our conscious experience, but is something that we have no internal access to—hence the term unconscious.

So, how does positing these different levels of embodiment call into question the theory of correspondence? Well, Lakoff and Johnson explain that “Truth claims at one level may be inconsistent with those at another.” In order to illustrate this problem, the authors discuss the embodiment of color concepts.  For example, consider the statement “Grass is green.” Surely we experience greenness inhering in grass, and thus this statement would seem to be true based on the correspondence theory of truth. However, the authors argue, this is only true at the phenomenological level of embodiment. On the neural level of embodiment “greenness” does not “inhere” in objects or things; rather, it is created by reflected light, our retinas, and our neural circuitry etc. The authors further articulate the alleged difficulty:

At the neural level, green is a multiplace interactional property, while at the phenomenological level, green is a one-place predicate characterizing a property that inheres in an object. Here is the dilemma: A scientific truth claim based on knowledge about the neural level is contradicting a truth claim at the phenomenological level. The dilemma arises because the philosophical theory of truth as correspondence does not distinguish such levels and assumes that all truths can be stated at once from a neutral perspective.

It is here where I believe the authors are mistaken, on multiple levels (see what I did there?).

Effects, formal and virtual
First, even though a Scholastic, like myself, would utter a proposition like “Grass is green” and indeed say that such a proposition is true, what they mean by such a statement is utterly foreign to what the authors attribute to any type of metaphysical realism—namely, that color is a single thing or property that inheres in substances. Thomist Peter Coffey illustrates:

When, for instance, the normal perceiver apprehends snow as white, and spontaneously asserts that “snow is white,” he means not that the color-quality in question is wholly independent of the nature, structure, and conditions of his visual sense organs for its specific character as present to his consciousness.

The point here is that when us Scholastics say “Grass is green” we don’t mean that there is a single property of greenness that inheres objectively in objects or things—that is, we do not say that color exists formally or actually. Rather, we would say that color exists virtually, or potentially. Therefore a Scholastic would agree with the authors when they say the following: “Colors are not objective; there is in the grass or the sky no greenness or blueness independent of retinas, color cones, neural circuitry, and brains.” Thus, to say that color exists virtually is to say that when all the necessary prerequisites are conjoined—the reflective properties of objects, our bodies and brains etc.—then and only then can we have the actuality of color. Upon taking this into account, proposing that color does not exist would only be true if effects could only obtain formally, which is something the Scholastic would not concede. For, to reiterate, effects can exist formally, but they can also exist virtually. And therefore to claim that only formal effects can obtain is to beg the question against the metaphysical realist.

Now, the significance here is that the statement “Grass is green” is still in fact objectively true, as long as what we mean by this statement is that grass is virtually, and not formally, green. However, the authors would still say that this cannot be an objective truth, because the property of greenness does not inhere objectively in the world. But to do so would be to conflate objective truth with truth obtaining objectively. That is to say, since color requires the existence of human embodiment for it to obtain, then color does obtain objectively, by definition. However, this doesn’t mean that the truth “Grass is green” is therefore not objective. Remember that all that’s required for the correspondence theory is for a truth-bearer to correspond to a truth-maker—again, either formally or virtually. And since grass is in fact (virtually) green, then the statement “Grass is green” is objectively true.

Levels of embodiment
Unfortunately (for the reader still awake at this point) this has all only constituted the first objection to the claims of Lakoff and Johnson. For the authors would still fire back that all my musings above assume a neutral perspective from which to promulgate my supposed truth. That is to say, my arguments above about the reality of color are all predicated on only one level of embodiment (or are they?) and to do so is to erect one level of embodiment as superior over another, thereby doing an injustice to the other levels. The authors articulate:

Both the phenomenology-first and science-first strategies are inadequate in one way or other. If we take the phenomenology-first strategy, we miss what we know scientifically is true about color. We get the scientific metaphysics of color wrong. Our “truth conditions” do not reflect what we know to be true. If we take the science-first strategy, we do violence to the normal meaning of the word and to what ordinary people mean by “truth.”

This is all to say that by claiming color exists virtually is to do damage to the phenomenological level of embodiment upon which color seems to exist formally. But my retort is this: so what? On the phenomenological view we can only talk about how we perceive sense qualities, and just because we perceive something does not mean it is there, or that it’s there in the fashion we perceive it to be, or that it inheres in the world. A perfect example to knock down the authors’ claims here is the experience of hallucinations. At the phenomenological level a hallucination is very real, in that we experience qualia with regards to said hallucination. But it is only at the neural level that we know that the hallucination is not actually real. And the crucial point is that everybody, including the authors, would take a "science-first strategy" here and claim that when somebody hallucinates a dead relative (for instance), the statement “my dead relative appeared to me” is unequivocally false. And the really unreasonable thing to do here would be to say that the existence of the dead relative is true at the phenomenological level, but just not at the neural level! Hence, it seems that, contrary to the authors, we must, and do, utilize certain levels of embodiment over and above others in different circumstances. Thus, there is no dilemma when one level of embodiment contradicts another.

So, the authors are simply mistaken to say that the correspondence theory is false for not distinguishing the different levels of embodiment. For the levels of embodiment do not at all call truth, as classically conceived, into question. In fact, we’ll see next post that this conception of truth is unavoidable, and that it is the truth of Embodied Realism that runs into various difficulties.
Posted by Steven Jake at 11:52 AM